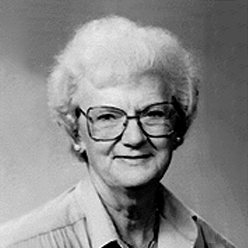 Adrienne S. Anderson attended New Jersey College for Women (which was renamed Douglass College) on a Mabel Smith Douglass Scholarship, then went on to become the first woman to earn a master’s degree in metallurgical engineering at Lehigh University. She was an analytical chemist and metallographer at Metal and Thermit Corporation, a research assistant at Lehigh, a field secretary in the Douglass admissions office, and a coordinator of advisory services for women at Douglass. She edited Options for Women in New Jersey, a directory of career services and continuing education opportunities. Appointed to the Rutgers Board of Governors in 1984, Anderson resigned from her second term as chair shortly before her death in 1991. She served on the Board of Trustees from 1977–88. She founded the New Jersey College and University Coalition on Women’s Education, and was the first chair of the Board of Governors of the New Jersey Institute for Collegiate Teaching and Learning. A former president of the Associate Alumnae of Douglass College, she received the Margaret T. Corwin Award for Alumnae Service and the New Jersey Women of Achievement Award.