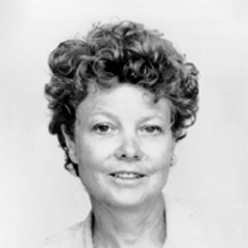 Alice Aycock’s work has been exhibited in major collections throughout the world, including the Guggenheim, Museum of Modern Art, Metropolitan Museum of Art, Brooklyn Museum, Whitney Museum of American Art, Kunstmuseum, and Staatsgalerie. In 1977, she had a solo exhibition at the Museum of Modern Art and has since had two major retrospective exhibitions. Aycock also creates large-scale architectural sculptures. Her works include Starsifter for JFK International Airport, The Tuning Fork Oracle for Mason Gross School of the Arts at Rutgers University, Spiral Stair for the San Francisco Main Library, and East River Roundabout in New York City. In 1990, the Storm King Art Center in Mountainville, New York—the leading North American venue for the exhibition of large-scale sculptures—celebrated its 30th anniversary with a show of Aycock’s drawings and sculptures. The National Endowment for the Arts and the City of New York Art Commission have honored her for her work. Aycock is also a faculty member in the BFA program at Manhattan’s School of Visual Arts, one of the nation’s leading independent art and design schools.