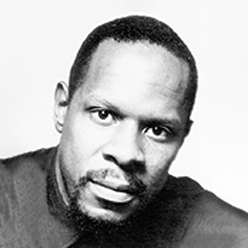 Avery F. Brooks performs to critical acclaim the title role in Phillip Hayes Dean’s one-man play about another distinguished Rutgers graduate—Paul Robeson RC’19. Brooks, the first African American to earn a Master of Fine Arts degree in acting and directing from Rutgers, has worked extensively with the Smithsonian Institution’s program in Black American culture. He was nominated for an American Cable Entertainment Award for his performance in Showtime’s television production of Uncle Tom’s Cabin. He has performed with the Shakespeare Theatre Company, and he sang the title role in the American Musical Theater Festival production of the Anthony Davis opera X: The Life and Times of Malcolm X. He is well known for starring as television’s Hawk on Spenser: For Hire and A Man Called Hawk, which he also produced. He also starred as Captain Sisko, the main character in the TV series Star Trek: Deep Space Nine. His movies include the 1998 Academy Award-nominated American History X, and the 2001 action film 15 Minutes, which costarred Robert De Niro.