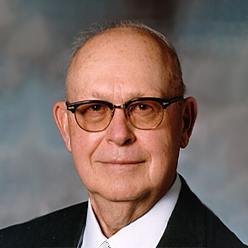 C. Reed Funk truly enjoyed watching grass grow. In fact, when he spotted an interesting sample, he was apt to whip out a pocketknife and trim a few blades for closer inspection. The former Utah farm boy joined Cook College as an instructor in 1956 and led one of the world’s most productive turf grass-breeding programs for 34 years. Grasses he developed are so well known and favored that they grow on millions of lawns, including that of the White House. “Manhattan” perennial ryegrass and “Rebel” tall fescue are among the key commercial varieties for which he held plant patents and more than 60 U.S. Plant Variety Protection Certificates. Funk contributed to the revolutionary discovery that grass-dwelling fungi called endophytes can produce and stimulate plants to produce natural pesticides. His honors: New Jersey Inventors Hall of Fame, U.S. Department of Agriculture’s Distinguished Service Award for Agricultural Research, and fellowship in the American Society of Agronomy. Funk was a professor emeritus of plant biology at Rutgers’ School of Environmental and Biological Sciences and bred under-utilized perennial food crops—particularly nut trees—to help feed the world.