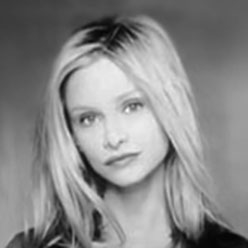 Like many aspiring actors, Calista Flockhart suffered her share of tough times, teaching aerobics and taking bit parts in soap operas. Now, she’s a household name, having starred for five years in the highly rated television show Ally McBeal. After studying with William Esper at Mason Gross, Flockhart paid her dues along the way to stardom with roles in a Williamstown Theater Festival presentation of Death Takes a Holiday and an off-Broadway production of Wrong Turn at Lungfish. She had a key supporting role in television’s Darrow and won her first starring role in the acclaimed HBO series Lifestories: Families in Crisis. Flockhart’s 1994 Broadway debut in The Glass Menagerie won her a Theater World Award and a Clarence Derwent Award. Her performance in Chekhov’s Three Sisters earned her a 1997 Tony Award nomination. Her numerous fi lm roles include A Midsummer Night’s Dream, The Birdcage, Naked in New York, and Quiz Show. Her comic and dramatic portrayal of a young lawyer on Ally McBeal won her a 1998 Golden Globe award and a 1999 Emmy for outstanding comedy series. She currently stars on the hit ABC drama Brothers & Sisters.