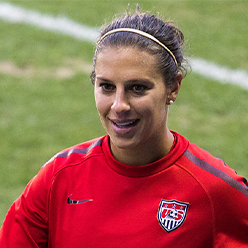 Carli Lloyd is a former Rutgers University soccer standout who has played for various clubs in the Women’s Professional Soccer league. The center midfielder currently plays for Western New York Flash in new American National Women’s Soccer League and has been a member of the United States Women’s National Soccer Team (USWNT) since 2005. In 2008 and 2012, Lloyd scored the gold medal-winning goals in both Olympic finals, the only woman in history to score the winning goal in two separate Olympic gold medal matches. A native of Delran, New Jersey, Lloyd grew up playing soccer for both her local high school team as well as the Medford Strikers, where she won a State Cup in 1997 and 1998. In 1999 and 2000, she was named the girls’ High School Player of the Year by the Philadelphia Inquirer. During her four years at Rutgers, Lloyd became the only Scarlet Knight to earn First-Team All-Big East Honors four times in her career (2001-2004). She is Rutgers’ all-time leader in points (117) and goals (50) and was named the 2001 Big East Rookie of the Year, the first Rutgers player to earn that honor, and the 2004 Big East Midfielder of the Year. Lloyd was also a three-time NSCAA All-American and a semifinalist for the Hermann Trophy. Lloyd played for the National Under-21 team before making the jump to the senior team. She appeared in the Nordic Cup four times between 2002 and 2005, winning titles in all four years. As a member of the USWNT, Lloyd has more than 149 caps and 42 goals scored. She established herself in a starting role during the 2007 World Cup, in which the U.S. came in third. Lloyd finished third on the team in scoring, with nine goals and three assists, her most prolific scoring year as a member of the USWNT. She played all 600 minutes during the 2008 Olympics and scored two pivotal goals in the tournament, the winning goal in a 1-0 victory over Japan in group play, and then the gold medal game winner in overtime against Brazil. Lloyd was also a member of the 2011 U.S. World Cup team, which finished second to Japan. During that year, she tied for the team lead in games played with 19, starting them all, and led the U.S. in minutes played with 1,654. She played all but 16 minutes of the World Cup, scoring one goal with one assist. In the 2012 London Olympics, Lloyd scored both American goals in U.S. ‘s gold medal victory. She scored four goals overall in the tournament, and tied for the second highest on the U.S. squad. In 2008, she was named the U.S. Soccer Female Athlete of the Year. In 2012, Lloyd was named to FIFA’s list of top ten players in the world.