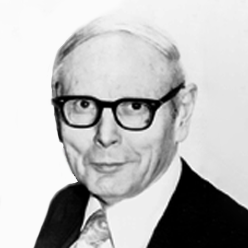 An open-heart surgery pioneer, Charles P. Bailey graced the cover of Time in 1957 for his contributions to modern medicine. With only two years at Rutgers under his belt, the young Bailey entered Hahnemann Medical College in 1928 and earned a M.D. degree in 1932. He became thoracic surgery director at Hahnemann, and by 1948 had introduced closed mitral valve heart surgery to counteract the effects of rheumatic fever, syphilis, and congenital defects. He had a clinic in Philadelphia and later directed cardiovascular surgery at Deborah Hospital in Browns Mills. Bailey was professor and chair of the surgery department at New York Medical College’s Flower and Fifth Avenue Hospital. He also was on staff at St. Barnabas Hospital in the Bronx, New York; St. Michael’s Medical Center in Newark; and Jersey City Medical Center. In 1973, he earned a degree from Fordham Law School, then retired from medicine and became an expert in medical-legal and insurance issues. He worked every day at the Physicians National Risk Retention Group, training doctors in 21 states on how to lower their risk of malpractice lawsuits, until his death in 1993.