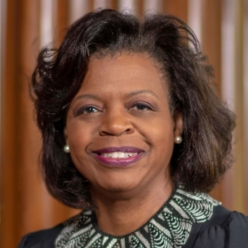 Cheri Beasley is an esteemed jurist and one of the most prominent legal figures in North Carolina, where she serves as chief justice of the North Carolina Supreme Court. The recipient of numerous professional awards and honors, she is also an inductee into the Douglass Society, the highest honor bestowed by the Associate Alumnae of Douglass College, and the Hall of Fame of the Rutgers African-American Alumni Alliance (RAAA), Inc.

Beasley earned a bachelor’s degree in economics from Rutgers in 1988 and a law degree from the University of Tennessee in 1991. She practiced law in the public defender’s office of North Carolina’s 12th Judicial District, where she tried cases ranging from misdemeanors to capital felonies. In 1999, she began her judicial career as a district court judge in Cumberland County.

After ten years of service on the district court bench, Beasley was elected an associate judge on the North Carolina Court of Appeals, making her the first African-American woman to win a statewide race without first being appointed to the office. In 2012, Governor Beverly Perdue chose Beasley to fill the vacancy on the North Carolina Supreme Court created by the retirement of Justice Patricia Timmons-Goodson.

A tireless mentor of students and fellow judges, Beasley travels extensively to lecture and promote the rule of law, the administration of justice, the importance of an independent judiciary, and fair judicial selection.