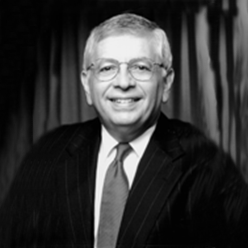 David J. Stern was a Dean’s List history student and a Henry Rutgers Scholar at Rutgers. After graduating from Columbia University School of Law in 1966, he began his association with the NBA by joining the law firm that represented the league. Then in 1978, he joined the NBA as general counsel and later became the league’s executive vice president in 1980. He was unanimously elected as the NBA’s fourth commissioner and began his tenure on February 1, 1984. Since then, the NBA has added several franchises, enjoyed an increase in revenues, expanded its national television exposure dramatically, launched the WNBA, and created the National Basketball Development League. His international initiative has led to the televising of NBA games in more than 200 countries and 40-plus languages, and the opening of several offices in cities outside the United States. Under his leadership, the NBA and its players have supported the Read to Achieve Program, child-abuse prevention, alcohol-abuse prevention, volunteerism, hunger relief, and the Special Olympics. Stern has also served on the Rutgers University Foundation Board of Overseers.