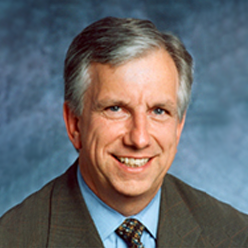 Dennis M. Bone is president of Verizon New Jersey, responsible for the telecomm giant’s corporate interests throughout the state. At the leadership helm since 2000, he has guided Verizon through progressive change, including the launch of a new fiber-optic network that revolutionized internet, TV, and phone service.

Bone started his telecommunications career in 1979 as an outside plant engineer for New Jersey Bell. He worked in operations, competitive assessment, regulatory matters and external affairs, and public policy before being named president of the newly organized Verizon New Jersey, based in Newark, in 2000.

A testament to Bone’s visionary leadership, New Jersey’s technological platform for the 21st century is positioned to transform innovations in every field imaginable. Bone was a leader in Verizon’s efforts to break down the old telecommunications monopolies, paving the way for consumers to have more choices. His enterprising spirit and business savvy led to the successful rollout of Verizon FiOS in New Jersey. This advanced fiber-optic network delivers an all-fiber connection directly to consumers’ homes and offers fast and reliable broadband connections, high-quality HD video, and a growing array of interactive services.

More than 15,000 employees work for Verizon New Jersey, and Bone is a respected leader among them. He is committed to developing a strong workforce within the company, and also within the state of New Jersey. As chair of the New Jersey State Employment and Training Commission, Bone is passionate about developing new and innovative workforce-investment policies that will empower citizens to reach their full potential as workers and also further New Jersey’s agenda of sustaining a skilled workforce capable of meeting the demands of a global economy. Bone is also the chair of Choose New Jersey, a nonprofit that encourages and nurtures economic growth throughout the state. His robust civic engagement does not end there, as Bone is on the Board of Trustees of the New Jersey Institute of Technology, the Newark Alliance, the Liberty Science Center, the New Jersey Center for Teaching and Learning, and the Aviation Research and Technology Park. In addition, he is on the Board of Directors of the New Jersey State Chamber of Commerce, the New Jersey Performing Arts Center, and the New Jersey Utilities Association. In addition, Bone served as co-chair of the 2008 gala that celebrated the 100th anniversary of Rutgers University in Newark and delivered the commencement address at the 2005 Rutgers Business School graduation ceremony.

Bone’s educational background is well-rounded. He graduated in 1973 from the West Virginia University Institute of Technology with a degree in mathematics. While working for New Jersey Bell, he attended night classes at Rutgers Business School and received an M.B.A. in 1984. He also has a master’s degree in counseling from Johns Hopkins University.