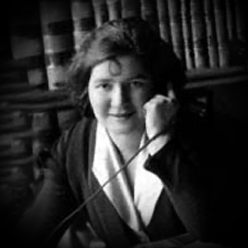 Despite her teacher’s disapproval, Elizabeth Blume-Silverstein decided on a law career in eighth grade. “I resolved to become a lawyer even if some people think the profession unfit for a girl,” she said. In 1911, she was in the first graduating class of Rutgers’ School of Law–Newark. She was a woman of many “firsts” in areas dominated by men, including trying and winning a murder case, being elected to the American Jewish Congress in 1916, and serving on the Essex County Draft Board as a legal adviser during World War I. She was only 18 when she graduated from the law school, which was three years too young to take the bar exam in those days. Soon after her 21st birthday, she became one of the first women in the state to pass the bar. By the time she was 29, she ran one of the most active law practices in Newark. She worked as a member of the Women’s Political Union—the state’s suffrage organization—to pass the 19th Amendment. In 1932, she helped draft the Republican Party platform urging the repeal of Prohibition. Because of the way the law was written at the time of her 1934 marriage to Max Silverstein, she was one of the first women to hyphenate her name to protect the legality of the work she had done while single. She died in 1991.