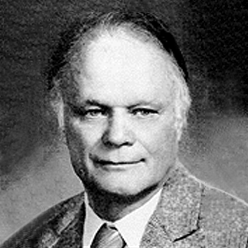 F. Herbert Bormann’s discoveries have made “acid rain” a household term. Professor emeritus of ecosystem ecology at Yale University’s School of Forestry and Environmental Studies, Bormann was one of the world’s preeminent ecologists with an outstanding reputation in scholarship, teaching, and public service. He was the cofounder of the Hubbard Brook Ecosystem Study in New Hampshire’s White Mountain National Forest, which has been a major model for the ecological and biogeochemical research of terrestrial ecosystems since its origination in 1960. An expert on the effects of human activity on natural systems, Bormann’s co-discoveries of the increasing trends of acidity in precipitation clearly established this phenomenon as a threat to natural ecosystems and possibly to the well being of mankind. Bormann published many articles and several books. He was a president of the Ecological Society of America and a member of the American Academy of Arts and Sciences and the National Academy of Science.