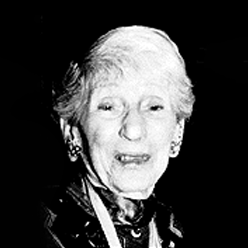 Armed with tenacity and determination, Fannie Bear Besser spent 60 years as an advocate for social justice. She was admitted to the New Jersey Bar in 1920 and practiced law until 1924, when she gave birth to the first of three children. In the late 1930s, she returned to legal practice as a volunteer, first for the New Jersey Board of Mediation and then for the U.S. Army Legal Department during and after World War II. She received two Army commendations for her work. After the Soviet invasion of Hungary in 1956, she served on the New Jersey Governor’s Commission for Refugees. In 1968, at age 67, she became a full-time volunteer at Essex-Newark Legal Services in Orange, where she took a special interest in the most difficult cases of child and spousal abuse, divorce, and tenant disputes. In 1989, she earned the governor’s Alice Paul Humanitarian Award for professional performance that exemplifies the “best and noblest characteristics of humankind.” She was the first recipient of the Fannie Bear Besser Award for Public Service in 1990, given by the School of Law–Newark Alumni Association. She died in 1992, just shy of her 92nd birthday.