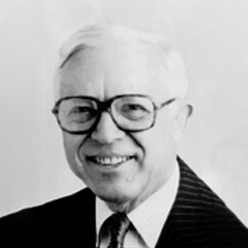 Floyd H. Bragg’s success as a leader lay in his remarkable ability to raise aspirations. After giving nearly 50 years of volunteer service to Rutgers, he became chair of the Campaign for Rutgers, contingent upon Rutgers’ raising the campaign goal from the recommended $75 million to $100 million. When the campaign concluded in 1990, the grand total was more than $166 million. Bragg remembered his first year on the Banks during the Depression, when Rutgers offered him a $50-per-semester scholarship—enough to help him over the financial crunch. He said it was a gesture he never forgot. After graduation, Bragg went to work for Prudential Insurance Company, where he spent 44 years, serving as president of Canadian operations, president of North Central operations, and finally, senior vice president for corporate public affairs. He served as chair of Rutgers’ Board of Governors and of the Rutgers University Foundation Board of Overseers, as well as president of the Rutgers Alumni Association. He also was an emeritus member of Rutgers’ Board of Trustees and a President’s Council executive.