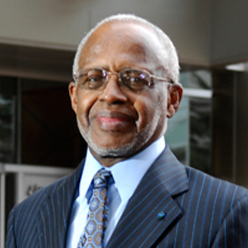 George C. Hill is an expert in the microbiology of infectious disease. A professor at Vanderbilt University School of Medicine and the immediate past president of the National Foundation for Infectious Diseases, Hill has conducted groundbreaking research to advance biomedical science worldwide, resulting in a broader understanding of the tsetse fly-transmitted “African sleeping sickness.” The Levi Watkins Jr. Professor at Vanderbilt, Hill is also the assistant vice chancellor for multicultural affairs and special assistant to the provost and vice chancellor for health affairs. A renowned researcher in the field of molecular biology and biochemistry of African trypanosomiasis, a parasitic disease that is endemic in some regions of sub-Saharan Africa, Hill investigates the molecular and biochemical events occurring during differentiation of African trypanosomes. He has contributed significantly to the world’s knowledge of these organisms’ electron transport systems.

Hill’s laboratory was the first to grow the Trypanosoma rhodesiense in culture, the causative agent of African trypanosomiasis. He has received extensive research support from the National Institutes of Health, the National Science Foundation, and other federal agencies. He also received the prestigious Seymour Hutner Prize for Research from the Society for Protozoologists.

In 2012, Hill was elected a fellow of the American Association for the Advancement of Science; he was elected a fellow of the Academy of Microbiology in 2002 and to the Institute of Medicine of the National Academy of Sciences in 1998. His expert service to numerous governmental advisory committees focusing on biomedical sciences research and graduate education is extensive.

Prior to being named the assistant vice chancellor for multicultural affairs at Vanderbilt, Hill was the associate dean for diversity in medical education from 2002-2011. An extension of these roles, Hill works throughout the country to advance opportunities for underrepresented minority students in medicine and the biomedical sciences. In 1999, he was recognized as a “Giant in Science” by the Quality Education for Minorities Network. He also chaired the National Science Foundation Committee for Equal Opportunity in Science and Engineering.

Before joining Vanderbilt, Hill was a microbiology professor and the vice president for sponsored research at Meharry Medical College in Nashville, Tennessee.

Originally from Camden, New Jersey, Hill received a B.S. degree from Rutgers’ Camden College of Arts and Sciences. He and his twin brother, Washington C. Hill CCAS’61 (a medical doctor and 2006 inductee to the Rutgers Hall of Distinguished Alumni), pledged a leadership gift that will allow Rutgers to open the Hill Family Center for College Access. George Hill received a M.S. degree from Howard University and a Ph.D. from New York University. He was an NIH Postdoctoral Special Research Fellow at the University of Cambridge and a Fulbright Scholar at the University of Nairobi.