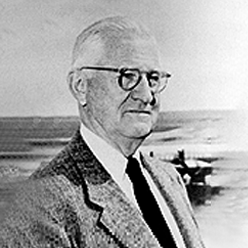 Known as the “dean of city planners,” Harland Bartholomew was considered the greatest authority on municipal planning in the mid-20th century. He attended Rutgers for two years, then entered the work force. He later received an honorary Rutgers degree. For many years he was president of Harland Bartholomew & Associates, a firm that served as city planners for at least 125 major American and Canadian cities. His many contributions include serving as a consultant on planning at Rutgers, especially for the Busch Campus. He was the first paid planner for the City of Newark, and he was instrumental in rebuilding obsolete portions of American cities, particularly St. Louis; Washington, D.C.; and Memphis, Tennessee. In 1940, President Franklin D. Roosevelt appointed him to the National Interregional Highway Committee. The report of this committee, made in 1944, was the start of our Interstate Highway System. In 1953, President Dwight D. Eisenhower appointed him chair of the National Capital Planning Commission, which led to the construction of the Washington Metro system. He was also a professor at the University of Illinois. He died in December 1989, a few months after his 100th birthday.