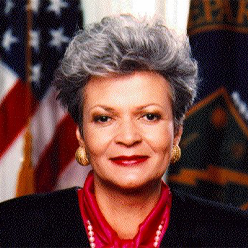 U.S. Secretary Of Energy
School of Law–Newark 1966
Hall of Distinguished Alumni Class of
1994

Hazel R. O’Leary served as the seventh U.S. Secretary of Energy from 1993–97. Under her leadership, the department influenced the debate on major economic and national security initiatives. After law school, she began her career as the Essex County and New Jersey state prosecutor, before moving to Washington, D.C., where she served as a senior energy policy official during both the Ford and Carter administrations. She was vice president and general counsel for O’Leary & Associates, an international energy economics and strategic planning firm from 1981–89, when she left the firm to become executive vice president of corporate affairs at Minnesota’s Northern States Power Company. O’Leary then rejoined O’Leary & Associates for three years. From 2000–01, she served as president and COO of Blaylock & Partners, a New York-based investment banking and brokerage firm, before returning to O’Leary & Associates. In 2004, she became president of Fisk University in Nashville, Tennessee. Fisk is a highly regarded university with an enrollment that is 97 percent African-American.