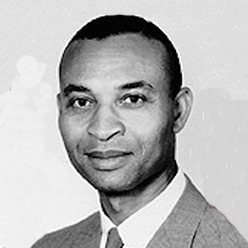 From 1959–61, John Howard Morrow served as the first U.S. ambassador to the Republic of Guinea in West Africa. He wrote about his experiences in First American Ambassador to Guinea, published by Rutgers University Press. He subsequently served two years as the U.S. representative to the United Nations Educational, Scientifi c and Cultural Organization in Paris, with the personnel rank of minister. He was an alternate delegate to the 15th General Assembly of the United Nations and worked as an administrator with the Foreign Service Institute of the U.S. State Department. Born in Hackensack, Morrow taught in Trenton and Bordentown after graduating from college and then served as a French professor and department chair at Talladega College, Clark College, Atlanta University, and North Carolina College. He joined the Rutgers faculty in 1964 as a professor of romance languages and chair of the Department of Foreign Languages at University College, posts he held until his retirement in 1978. A residence hall on the Busch Campus is named in his honor. Morrow died in 2000.