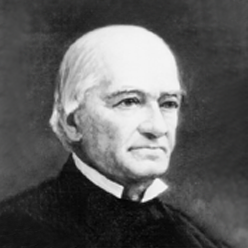 With no prior schooling other than reading the Bible and a few Greek and Latin books, Joseph P. Bradley graduated at the top of his class at Rutgers, practiced law in Newark, and served as an associate justice of the U.S. Supreme Court for 22 years. Born on a farm near Albany, New York, he arrived at Rutgers wearing clothing spun from wool from his father’s sheep and shoes molded from homemade leather. After graduating with honors, he was admitted to the New Jersey Bar in 1839. During the Civil War, he opposed the secession of the South. In 1870, President Ulysses S. Grant appointed him to the U.S. Supreme Court, where he served until his death in 1892. Part of a commission impaneled to consider disputes in the counting of electors in the 1876 presidential election, he proved to be the swing vote that gave the presidency to Rutherford B. Hayes. Bradley was the author of the majority opinion in a series of landmark cases collectively called The Civil Rights Cases. The Supreme Court opinion concluded that the 14th Amendment prohibits state legislation that denies equal protection of the law to any race, class, or individual.