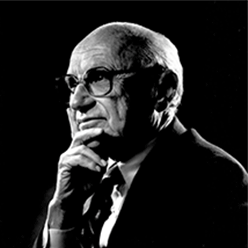 Milton Friedman was a major voice against government intervention in the economy, promoting his ideas in a best-selling book, Free to Choose , which he wrote in 1990 with his wife, Rose. While at Rutgers, he studied under Professor Arthur F. Burns, later the chair of the Federal Reserve and an advocate of the Monetarist School of Economics, which maintains that the economic cycle is determined more by money supply and interest rates than by fiscal policy. Friedman, known for his fierce intellectual integrity, had turned away offers of government positions, fearing that his principles might prevent his carrying out administration objectives. He had been president of the American Economic Association, a member of the research staff of the National Bureau of Economic Research, and a columnist for Newsweek. Friedman taught at the University of Chicago, where he promoted the Chicago School of Economics. He won the Nobel Prize for economics in 1976. In 1998, Friedman and his wife published Two Lucky People: Memoirs. From 1977, he worked as a senior research fellow at the Hoover Institution of Stanford University. Friedman died in 2006.