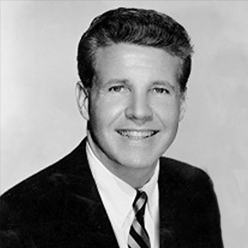 In his Scarlet Letter yearbook, next to a face recognized by much of the world, it states, “Ozzie! Who has not heard of that name? From Varsity quarterback to Varsity debater and all that may be included therein are only an intimation of his accomplishments and versatility.” A participant in sports, college activities, and a member of Cap & Skull, it was perhaps in his college days as a musician and band leader that he first used the original melody of “Loyal Sons,” which was to become the radio theme song of Ozzie Nelson and His Orchestra. He graduated from law school during the Depression. Opportunities in the legal profession were dim so he turned to music as a career. In 1932, he hired Harriet Hilliard to be the singer with his band, and they were married two years later. He and his band appeared on many radio shows, and in 1944, Ozzie and Harriet began their famous Ozzie and Harriet Show. After eight years on the radio, Ozzie became the actor, director, and producer of the television series The Adventures of Ozzie and Harriet, which ran for 14 years. Subsequently, he acted in and directed several motion pictures. Ozzie Nelson died in California in 1975.