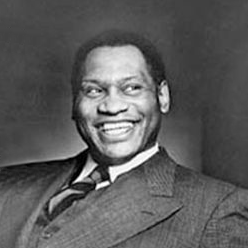 Born in Princeton, New Jersey, in 1898, Paul Robeson attended Rutgers College in New Brunswick on an academic scholarship, becoming the university’s third Black student. Robeson’s many scholarly accomplishments included membership in the Phi Beta Kappa Society and Rutgers’ Cap and Skull Honor Society. Honing his oratory skills as a member of the Intercollegiate Debating Association at Rutgers, Robeson delivered the commencement address as valedictorian to his graduating class in 1919. An extraordinary athlete, he was Rutgers’ first Black football player and won 15 varsity letters in football, basketball, baseball, and track. He was a two-time All-American in football who is in the College Football Hall of Fame. Robeson went on to earn a law degree from Columbia Law School but decided to use his talents in theater and music to advance African and African-American history and culture. In 1924, he surprised New York theater goers with his controversial lead role in Eugene O’Neill’s All God’s Chillun Got Wings. He won over audiences as the lead in The Emperor Jones in 1925, then toured the United States and Europe, performing in Porgy and Bess, Othello, and other works. The first African-American soloist to present a concert of spirituals, Robeson was an adept interpreter of the religious folk songs. In the Broadway revival of Show Boat in 1932, his rendition of “Ol’ Man River” was sensational. After a tour of the Soviet Union in 1935, he began speaking out against Nazism and espousing progressive causes, an act that made him a target of McCarthyism and U.S. government maltreatment. Over nearly four decades until his death in 1976, he achieved worldwide acclaim—not only as a performing artist, but as an activist speaking out for human rights. A towering figure in the African-American quest for social, political, and economic equity, Robeson connected this struggle with people around the world who also were fighting for political rights, cultural recognition, and economic justice.