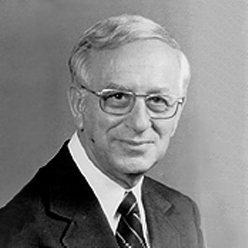 A first-generation American, Phillip Alampi grew up on a small farm in Williamstown and graduated from Glassboro High School, where he was active in Future Farmers of America and 4-H. After graduating from Rutgers in 1934, he taught high school vocational education in Salem County for 10 years. In 1945, he earned a master’s degree in education. The following year, he became a farm broadcaster, and for the next decade he hosted popular radio and television shows, many of them cohosted and produced by his wife, Ruth. In 1956, he was appointed New Jersey’s Secretary of Agriculture, where he served under five different governors for a total of 26 years— longer than any cabinet member in the state’s history. From that post, he successfully fought to preserve the state’s farmland and to market the state’s agricultural goods. He later became known as “Mr. Garden State.” After retiring in 1982, Alampi served as president of 42 civic and professional organizations and earned 146 awards, including an honorary doctorate from Rutgers in 1969 and the Rutgers Alumni Association’s Ernest T. Gardner Award for public leadership in 1985. He died in 1992 at age 79.