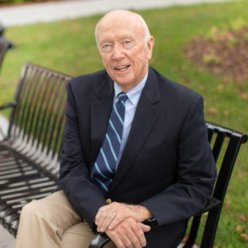 Vice Chairman of the Board, Johnson & Johnson, Retired
Rutgers Business School–Newark and New Brunswick 1962
Hall of Distinguished Alumni Class of
2019

A former vice chairman of the board of directors of Johnson & Johnson, Robert E. Campbell has been a driving force behind numerous successes in the corporate world and in higher education. His leadership has been crucial in shaping the contemporary face of health care and health care institutions at Rutgers.

Campbell graduated from Fordham University in 1955 with a degree in accounting. After serving as an officer in the United States Air Force, he embarked on a career in the Johnson & Johnson family of companies. Over the next thirty-five years he held myriad positions in finance and general management, including treasurer, vice president of finance, executive committee member, and chairman of the professional sector.

During his career and subsequent retirement, Campbell served in leadership and counseling roles with many institutions and community organizations. He is chairman emeritus of the Director’s Leadership Council of the Rutgers Cancer Institute of New Jersey, which owes much of its formation, development, and growth to his visionary guidance. He is also trustee emeritus and past chairman of the Board of Trustees of Fordham University and the Robert Wood Johnson Foundation.

Campbell is a former overseer of Rutgers University and the Robert Wood Johnson Medical School and was a board member of the University of Notre Dame’s College of Science. He has been active with numerous civic organizations, including the Governor’s Commission on Higher Education, through which he played a key role in integrating Rutgers with the University of Medicine and Dentistry of New Jersey—helping to found Rutgers Biomedical and Health Sciences.