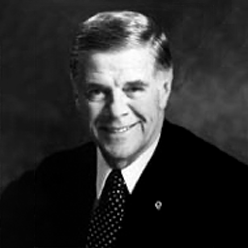 Roger G. Ackerman’s visionary leadership helped propel Corning Inc. to the forefront of the Information Age as one of the world’s leading producers of fiber-optic cable and other optical technologies used to create the backbone of the internet. He joined the company in 1962, the year he received a master’s degree in engineering from Rutgers. In 1996, he became chair of the board and CEO. After 39 years with the company, Ackerman retired from Corning in June 2001. During his tenure, he transformed a company best known for glass-ceramic cookware into one that is enjoying market-leading positions in some of the hottest areas of technology. Under his guidance, Corning began to invest more heavily in the booming telecommunications markets. Ackerman is an active volunteer at Rutgers, sharing both his time and expertise. He and his staff were instrumental in the campaign to honor the late director of Rutgers’ Institute for Engineered Materials with the endowment of the Corning-Saint Gobain Malcolm G. McLaren Chair in Ceramic Engineering. Ackerman is an overseer emeritus of the Rutgers University Foundation Board of Overseers, of which he has been a member since 1996.