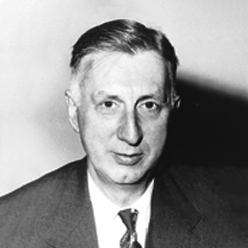 As a young journalist, Samuel G. Blackman scooped the world on the 1932 Lindbergh baby kidnapping by racing to the aviator’s estate near Hopewell on a tip and filing his story 32 minutes ahead of his competitors. Decades of journalism excellence followed that first big story. At Rutgers, he was editor-in-chief of the Targum and worked as a stringer for The New York Times. He worked for the New Brunswick Home News and the Rutgers Public Information Office before joining the Newark bureau of the Associated Press in 1931. His reporting of the Lindbergh affair and the trial and execution of kidnapper Bruno Hauptmann won him acclaim, as did his coverage of the Morro Castle steamship fire and the crash of the Hindenburg dirigible. By 1945, he was the New York City bureau chief for the Associated Press, and by 1958, when he took over the agency’s top editorial spot, it was said he had “more powerful influence on the nation’s news than any other journalist.” He retired in 1969 to direct the American Press Institute. Before his death in 1995, the 91-year-old Blackman appeared on television to compare the Lindbergh trial with the O.J. Simpson trial as “the trial of the century.”