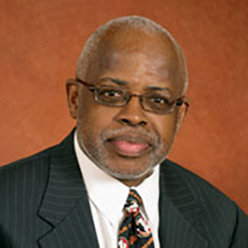 Washington C. Hill is one of the foremost perinatologists in the world and a leading expert on maternal-fetal medicine. Currently in a leadership role at Sarasota Memorial Hospital in Florida, Hill was raised in Camden and earned a bachelor’s degree in chemistry at Rutgers. After graduating from the Temple University School of Medicine, he served for nine years as a medical officer in the U.S. Army, and then worked as an obstetrician and gynecologist in Germany for three years. He completed a fellowship in maternal-fetal medicine at the University of California–San Francisco and Children’s Hospital of San Francisco. Hill has taught at several top medical schools around the country, including University of California–Davis and Vanderbilt University. His research focuses on the early detection of preterm birth, HIV in pregnancy, multiple births, and perinatal education. Throughout his career, he has provided and promoted optimal health care for high-risk pregnant women. Black Enterprise magazine named him one of the top 100 black physicians in the country.