Scott J. Laurer arrived at Rutgers University–New Brunswick fresh out of South Jersey, where he grew up in a small town and attended a private high school.

“Coming from where I did, Rutgers was huge,” says Laurer RC’87. “It opened my eyes to endless possibilities.”

His life journey since graduating reflects that sense of possibility. 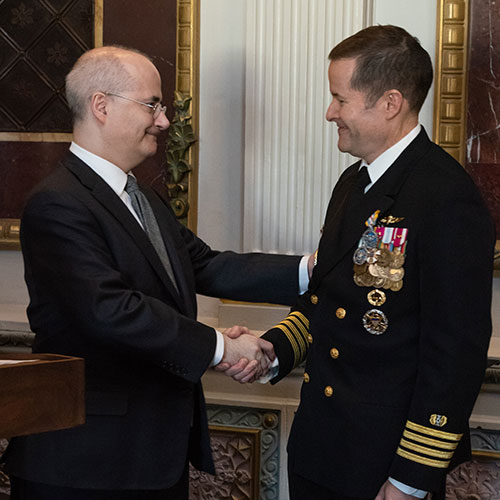 Laurer built a distinguished legal and military career in the U.S. Navy, playing a critical role in world-shaping events like the Iraq War and attaining high-level government positions, such as deputy legal adviser to the National Security Council from 2017 to 2019.

The married father of two and resident of northern Virginia recently began a new chapter—as a federal appellate judge.

Nominated in 2019 by President Trump and confirmed by the Senate this year, Laurer serves on the U.S. Court of Appeals for Veterans Claims. The court was established in 1988 to provide an impartial forum for veterans’ claims and hears cases on disability benefits, education assistance, survivor benefits, pensions, and other issues.

For Laurer, the job is an engrossing and satisfying second act to a 30-year military career.

“I have walked in their (veterans’) shoes and I know the issues they face,” he says. “This is a very bipartisan area of concern—most Americans share the desire to take care of veterans and make sure they get the benefits they are entitled to.”

The role also gives him an engaging new challenge in providing judicial review of decisions by the Department of Veterans Affairs.

“It’s really a complex niche area of the law,” he says. “And it is a growing area.”

When he entered Rutgers, Laurer already had a strong interest in the law. He majored in political science and met other students drawn to public service before he graduated and headed to Temple University School of Law.

He soon found his calling in the legal arm of the U.S. Navy, its Judge Advocate General’s Corps, made famous in the 1992 movie A Few Good Men with Tom Cruise and Jack Nicholson.

Laurer rose in the JAG Corps to serve in such positions as senior legal adviser aboard the USS Abraham Lincoln aircraft carrier during its 10-month deployment, supporting combat operations in Iraq and Afghanistan following the 9/11 attacks. His responsibilities were numerous and daunting—from making sure the vessel’s route respected international law to training American service members in the rules of engagement.

“The planning starts months ahead,” Laurer says. “My job was to ensure the operators understood where they were, what authority they had, and how to respond to hostile acts or hostile intent.”

In 2019, Laurer retired from the Navy as a captain. At the ceremony were Jim McCartney RC’87 and Jeff Liptrot RC’87, two of Laurer’s roommates at Rutgers in the 1980s.

“We all went on to law school and are practicing law,” he says. “We are good friends to this day.”