A Sense of Place

When Jennifer Baljko and her boyfriend Lluís López-Bayona decided to walk from Bangkok to Barcelona, everyone thought they were crazy. Cross 20 countries in Asia and Europe by foot, on a route stretching nearly 10,000 miles? Who does that?

But later this month, Baljko DC’93, and Catalan-born López-Bayona will arrive back in Barcelona, their home since 2006, after a three-and-a-half-year journey undertaken, according to their website, “to find the goodness in the world and see the kindness in strangers, one step at a time.”

Along the way, they have shared bread and tea with shepherds, accepted gifts of ice cream and watermelon from passersby, and been invited into strangers’ homes for hot showers, meals, and overnight stays. Only a handful of times—on perhaps six occasions in 950 days of walking—did they feel uneasy, when strangers with uncertain intentions approached them as they camped out overnight.

“We are in a circle of good people when we travel, most of the time when we’re in life, and we just don’t recognize it,” says Baljko. “Everybody’s afraid of everybody, and it’s not based in real experience. If more people moved in the world at slow motion and got to know their neighbors, (many of their fears) would be unnecessary.”

Although Baljko, 47, a freelance writer, and López-Bayona, 51, an actuary, are both experienced travelers and sometime marathon runners, extraordinary physical conditioning isn’t a prerequisite for a walk like this, she says. “But you need to be in marathon shape mentally,” she says. “Every day you’re in so much discomfort most of the day that you need to be mentally strong enough to handle the discomfort.”

Baljko made it through the most demanding days—toting her 40-pound backpack in 100-degree-plus heat through the deserts of Uzbekistan and Azerbaijan—with the help of an MP3 playlist that includes everything from the classic rock of Bruce Springsteen to the Hindu devotional music of Krishna Das.

The couple walked an average of 15 miles a day, with regular days off to rest; four times over the years they took breaks of several months, to avoid difficult weather or cope with medical issues. Visa restrictions or security concerns forced them to skip Pakistan, Afghanistan, Turkmenistan and part of Burma, and heat and blisters shortened their Azerbaijan trek, leaving some holes along their route. 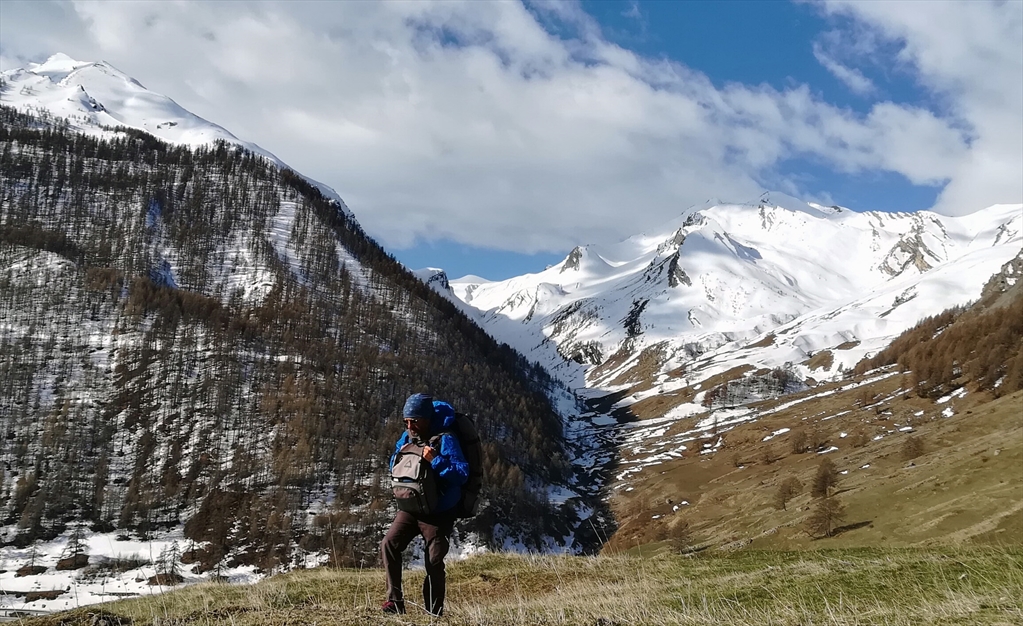 Lluís López-Bayona stands near the Maddalena Pass, a section of the Alps at the border between Italy and France. (Photo: courtesy of Jennifer Baljko)

But even so, the journey was plenty challenging, Baljko says, not least in testing their 16-year partnership. Ordinary cohabitation can’t match spending all day together, every day, under sometimes punishing conditions. “Everything is a negotiation, every single thing, and it’s easy to say ‘I’m just going to quit,’ because it’s so hard,” Baljko says. “But then it would be unfinished, and I think it’s worse to leave something unfinished than to just pick up the backpack again and keep going.”

The pair funded the journey out of savings, along with $3,000 in donations from friends and family, half of which they passed along in contributions to people or organizations they encountered along the way. “We’re giving little drops of love from our collective network to these places that we walk through,” Baljko says. “We hope for kindness; we give kindness back.”

During six days this month, Baljko also plans to donate $1 for every kilometer she walks to a scholarship fund established in memory of her classmate Sean Carr CC’93, who died suddenly five years ago.

Baljko remains in close touch with friends from Rutgers’ journalism program and with director Steven Miller, whom she calls “the glue that keeps all of us still together.” Her years at Rutgers were “really one of the most enriching periods of my life,” Baljko says. “There’s so much diversity there and so many things you can explore and so many different kinds of people you can talk to.”

During their long walk, Baljko and López-Bayona spent some of their downtime volunteering their services—giving English lessons to students in Thailand, organizing a clothing warehouse at a refugee camp in Greece, helping a Turkish café owner move his business to a new location. And they chronicled their trip in blog posts and in photographs posted on Instagram.

Once the celebrating ends—an early-evening party is already planned for June 29, the day they expect to arrive in Barcelona—their next steps remain undecided, Baljko says. Although they did not originally plan to write a book about their travels, they are now considering it. And after hundreds of nights sleeping under the stars in some of the world’s least traveled places, they are reconsidering where to settle down.

Given all she’s experienced, Baljko finds the notion of returning to crazy, busy Barcelona hard to square. “We’ve lived our whole lives in cities, but this need for silence and for quiet space in nature has become really important to us,” Baljko says. “You don’t hear the birds [there]. We’re so used to now hearing the birds.”