When Shobana Sood learned that she’d been awarded the George F. Smith Endowed Scholarship—a merit-based scholarship that allowed her to attend Robert Wood Johnson Medical School tuition-free—she told her mother that, when she could, she would endow a scholarship of her own. 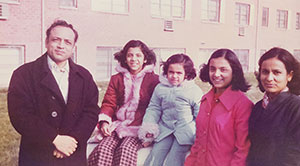 In 2019, three decades after making that vow, Sood—now a dermatologist affiliated with the University of Pennsylvania Health System—created the Asha and Mohinder Sood Endowed Scholarship, merit-based aid awarded annually to a student at the medical school, which is now part of Rutgers.

“That I had this opportunity,” Sood DC’89, RWJMS’93 says, referring to the Smith scholarship, “and that my parents didn’t have to worry about me financially meant so much to me.” She was 7 when she and her family, including her two older sisters, Vandana Sood Nanda and Ranjana Sood, immigrated to the United States from India. From the start, her parents, for whom the scholarship is named, made it clear that the move was to ensure a better future for their daughters.

“My mother gets huge credit for being feminist and propelling us to perform so that we could get equal pay for working,” says Vandana DC’83, RWJMS’87. “She said that we must earn the same in marriage as the man.”

The sisters’ story is, in many ways, the quintessential immigrant story: parents who valued education and told their daughters not to worry about paying for college and graduate school because, says Vandana, “it’s possible in the land of plenty.” It was always clear to the girls that, in Vandana’s words, “there were no limitations,” in terms of both securing an education and building a career. So it’s perhaps no surprise that the sisters all became successful professionals.

What might be surprising is that they all followed virtually the same path to success. Vandana, the eldest, attended Douglass College because it had an excellent reputation and appealed to her feminist inclinations.

Ranjana DC’85, RWJMS’90 followed two years later, and four years after that, Shobana, too, attended Douglass, also on a full-tuition scholarship. “The amount of nurturing we got there, like Tea with the Dean and other special small-college events, was pivotal in my growth as a young woman,” Shobana says. “Douglass taught us to celebrate being a strong and thinking female at a time when role models were fewer.”

As the family trendsetter, Vandana was the first to attend medical school, the fulfillment of a lifelong dream. “In India,” she says, “women doctors are extremely well accepted and respected, and that was a role I wanted to play in my life.”

Again, Ranjana followed her older sister. “I’d always looked up to Vandana,” she says, “and I figured if she wanted to go into medicine, it must be a good thing.”  But she also considered medicine a “rich” career: “not rich in the sense of wealth,” she explains, “but in the sense of being respected and wholesome.”

Shobana was the outlier. “I wanted to be a journalist for a long time—I really loved writing,” she says. But she took Vandana’s advice and signed up for some science classes at Douglass. That sealed things for her. “I did really well and started enjoying it,” she says of her pre-med courses.

She has no regrets. Medicine, she says, “has been the culmination of everything I like to do.” Surgery fulfills her love of working with her hands—when she’s not treating patients, she’s likely sewing or crafting—and she treasures the relationships she’s developed with her patients. That’s true of Ranjana as well, a rheumatologist in Mountain View, California. “I’m a very social person,” she says, “and I enjoy the interactions with my patients, some of whom are my close friends now.”

Vandana, a dermatologist in Charlottesville, Virginia, calls medicine “a purposeful career.” After practicing on the West Coast for 13 years, she moved back East and took some time off, but found herself sinking into depression, so she started working again. “When I put my white coat on again and went to see my first patient,” she says, “I felt like I was going to see my first patient ever, and I felt life begin.”

An epiphany followed. “We go around as doctors thinking that we’re helping people,” she says. “But I realized then how much my doctoring and my patients were helping me—I was getting rewarded every day.” Thanks to Shobana’s endowment, those rewards will now accrue to aspiring medical students for years to come.

The Asha and Mohinder Sood Endowed Scholarship provides scholarship support each year to a full-time medical student based on academic merit and financial need.
GIVE NOW