Nanette Fluhr has painted the official portraits of judges, clergy, and CEOs, as well as more casual portraits of adults, children, and families, and her work is in private and public collections around the world. In almost every case, her portraits begin with a conversation with the subject so that Fluhr RC’87 can get a sense of their personality and life story. While the people she paints generally have a preference for how they’d like to be portrayed, Fluhr sometimes suggests a different perspective.

Charles Apotheker, for example, a retired New York State Supreme Court judge, said he wanted to be painted evincing his stern “You’re going to jail” expression. But as he and Fluhr chatted, it was clear to her that she was talking with a highly compassionate man who cared deeply about his staff and the people who appeared in his court. “I can’t paint you that way,” she told him. His portrait tells the story of an august judge guided by kindness.

Portraiture appeals to Fluhr because it allows her to reveal the subject’s personality, something she does with clothing and carefully selected objects, body language, and the infinite subtleties of the human face. “I want to connect with my subjects on a deeper level, and I want my viewer to do the same,” Fluhr says. 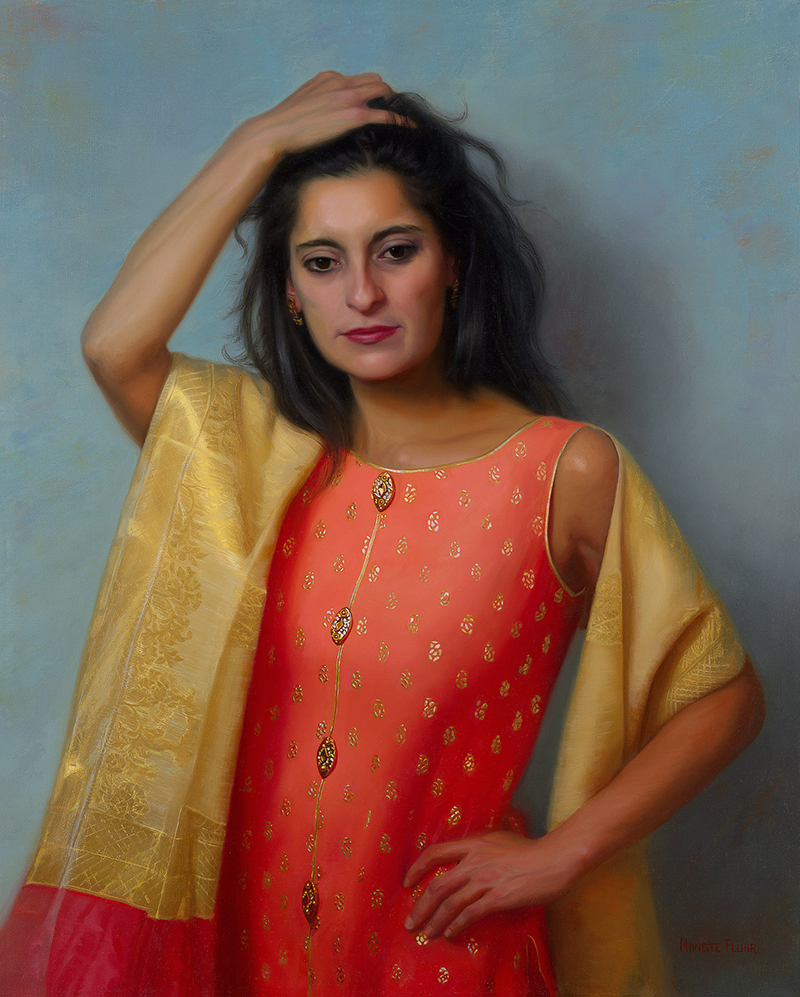 With Manu, the portrait of a Sikh American friend and fellow artist, the story’s most telling elements were the subject’s formal Indian attire and the contrasting casualness of her pose. Those very deliberate choices on Fluhr’s part communicated the complexity of Manu’s personality, not just to the casual viewer but also to the curators of the European Museum of Modern Art in Barcelona, Spain, who included the painting in the 2021 international exhibition Women Painting (All over the world).

Fluhr was drawn to art in childhood and planned to attend Rutgers’ Mason Gross School of the Arts. But her parents, who’d always supported her love for art, suggested she go to Rutgers College to become “a well-rounded person.” She agreed, and ended up majoring in communications and minoring in art. Rutgers, she says, “gave me a broader perspective on the world. It taught me to think and examine things, and it just ignited a love of learning.” She notes that the yoga and meditation she learned in a class at the student center still inform her creativity and worldview.

After graduation, she accepted a job as executive director of a medical society. A few years in, she realized that she still wanted to forge a life in art. She earned a bachelor of fine arts degree from the School of Visual Arts in Manhattan. There she met the professor John Frederick Murray, who taught her about the great figurative artists and their techniques. In an era when abstraction reigned supreme, she chose to embrace contemporary realism, a field in which women artists were, and continue to be, particularly underrepresented. She’s succeeded in the field through talent and perseverance. “I stuck to my guns,” she says, “and I’ve been very fortunate.”

To hone her craft, Fluhr became an officially sanctioned copyist at the Metropolitan Museum of Art, where she’s copied portraits by Rubens, Van Dyck, Velázquez, Rembrandt, and Élisabeth Vigée-LeBrun. She passes along her knowledge of classic techniques by teaching a variety of workshops, as well as classes at the Art League of Long Island.

She’s also passionate about fostering greater female inclusion in museums and exhibitions and supports a number of organizations dedicated to expanding opportunities for female artists. Still, she’d prefer to be known not as a “woman artist” but simply as an artist. Of the Women Painting exhibit, she says, “If you look at the show, they’re all stellar artists,” adding, “We don’t want inclusion because we’re women—we want to be judged on our own merits.”