When Orazio Giliberti didn’t secure a coveted spot at an American medical school in the late 1970s, St. George’s University in Grenada gave him a second chance to become a doctor.

The child of Italian immigrants, Giliberti NCAS’77 was preparing to head to Rome for medical training when a family friend encouraged him to consider a new university on a tiny island in the Caribbean. With the excitement of an adventurer, Giliberti set off to a country he’d seen only in an encyclopedia and joined one of the new school’s first cohorts. 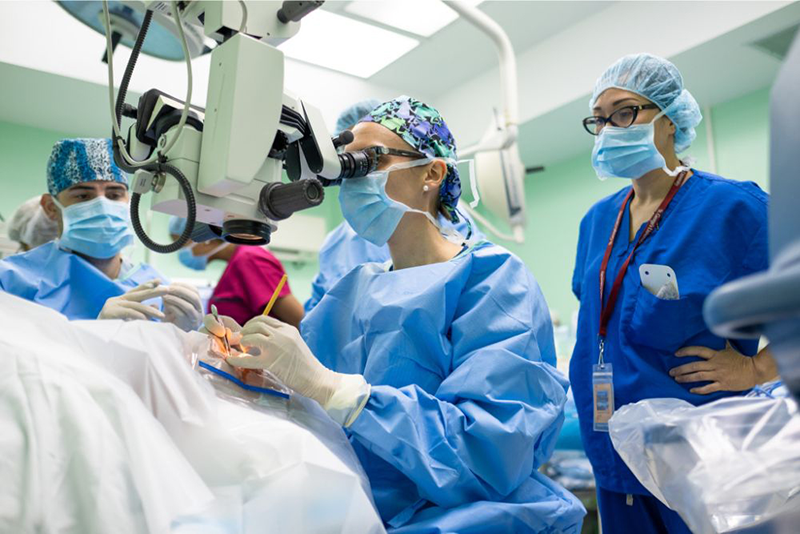 Now, Giliberti is an ophthalmologist who gives Grenadians a second chance at clear vision. For more than three decades, he has led a program that provides free eye care and operations to residents of the country where he became a doctor. In 2019, the program held its largest clinic to date: a two-week visit by a team of ophthalmologists who evaluated 250 patients and performed 49 surgeries.

“The most ambassadorial thing that we could do,” Giliberti says, “is improve the health care for a really remote island.”

The idea for the clinic came to Giliberti during his ophthalmology residency at Newark Eye and Ear Infirmary in the mid-1980s. He began visiting Grenada during his time off, meeting with government officials, assessing the eye care needs of the residents, and eventually starting a mini-clinic in 1986. Since then, Giliberti says, he and his colleagues have treated thousands of Grenadians.

Giliberti continued his regular visits to Grenada, even as he started the Totowa, New Jersey, ophthalmology practice he runs today. He recruited his colleagues in ophthalmology and other eye specialties, including fellow Rutgers alumni, to volunteer their time in Grenada. Soon the program was even flying seriously ill and blind Grenadian children to New Jersey for major eye surgeries. Airlines sometimes funded the trips, Giliberti says, and additional financial support for the program came from St. George’s University, pharmaceutical companies, and other donors.

The eye clinic now operates about nine months a year with a rotating cadre of eye specialists from across the United States, including Giliberti’s daughter, Francesca Giliberti, an ophthalmologist who graduated from St. George’s in 2010. (Francesca took the reins of the 2019 clinic, which also marked the start of a collaboration with the nonprofit Surgical Eye Expeditions International.) Grenada’s Ministry of Health steers patients to the clinic, where St. George’s students participate as part of their medical training.

The need for the clinic’s services remains as great as ever, says Giliberti, who is now St. George’s associate dean of clinical studies, as well as a professor and director of the ophthalmology program there. (He is also an associate clinical professor of ophthalmology at Rutgers New Jersey Medical School.) Diabetes is particularly rampant, he said, with many Grenadians going blind from the disease without realizing they were sick.

“The window of your health is through your eyes,” Giliberti says. “I believe in improving people’s ability to see. You directly affect people to see their world.”