Rutgers has a long history of producing Olympic-caliber athletes that continues to this day. One of the earliest was George Kojac, who competed nearly a century ago. This is the first in a series of profiles on Rutgers Olympians, past and present, leading up to the games in Tokyo this summer.

George Kojac and his brothers learned to swim in a pretty unusual place—New York City’s East River. That was a thing to do at the turn of the last century for kids like Kojac RC’31, born in 1910 to Ukrainian immigrant parents seeking a better life in the Bronx. Those river waters chisel Kojac’s speed and endurance, particularly his impressive backstroke, and helped him achieve a life beyond anything his parents could imagine as part of their American dream. 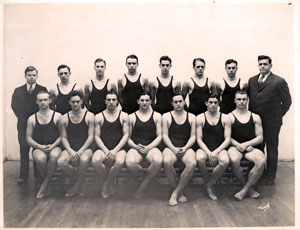 Kojac, using the skills he honed in the water, went on to set more than 20 world records, won a pair of Olympic gold medals, and used swimming to gain a world-class education. While he was still in high school, Kojac beat Johnny Weissmuller’s 150-yard backstroke record. At the 1928 Olympic Games in Amsterdam, the two teamed with Stanford’s Austin Clapp and Walter Laufer, who came out of Cincinnati’s dominant YMCA swim team, to set a world record of 9:32.2 in the 800-meter freestyle relay. Kojac also won the 100-meter backstroke event in 1:08.2.

In the end, it was Kojac’s pursuit of a medical degree that cut short his acclaimed swimming career. He competed in only one Olympics, but his brief appearance on the world stage affirmed his place as an early pool pioneer. The backstroke had only been added to the Olympic Games in 1904 and Kojac was one of its early masters. 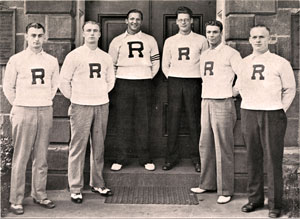 At DeWitt Clinton High School in the Bronx, Kojac swam a 50-yard backstroke in 29 seconds to set a world record, the first of 23 backstroke and freestyle records he would demolish over the course of his career. At Rutgers, he didn’t lose a single race and took the NCAA backstroke and freestyle national championships from 1927 to 1931. In his time on campus, he set nine school records and was the Intercollegiate Swimming Association 100- and 200-yard freestyle champion in 1931.

Kojak also held the world and intercollegiate records in the 440-yard freestyle, 440-yard relay, and the 300-yard medley relay.

During his tenure as team captain from 1929–31, Rutgers was 24–5 in head-to-head meets against other colleges.

Kojac graduated from Rutgers College in 1931 and opted to pursue medical school instead of chasing more Olympic gold. His backstroke records remained untouched through the 1932 Olympics in Los Angeles, but Kojac faded from competitive swimming. He made one newsworthy return to the pool five years later in 1936, when he won the 150-yard metropolitan senior backstroke title at an Amateur Athletic Union (AAU) meet at the Downtown Athletic Club in NYC.

With his sterling swimming career behind him, Kojac went on to earn a medical degree from Columbia University and became a physician. He was a U.S. Army Air Corps doctor in World War II and later enlisted in the U.S. Air Force and served in the Korean War. He retired from the military in 1965 as a colonel. Three years later, he was inducted into the International Swimming Hall of Fame.

Kojac was inducted into the Rutgers Athletics Hall of Fame in 1995 and died in 1996 in Virginia at the age of 86, having lived and swum through a much different era than we live in today.