For millennia, Jewish couples have cemented their marital unions with the nuptial contract known as a ketubah. While the practice hasn’t changed, the ketubah has, and David Master has built his business on artfully ushering it into the 21st century. 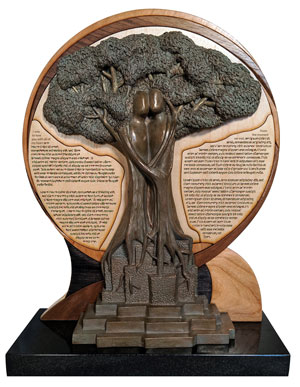 That wasn’t his original intention. In 2014, Master MGSA’06 and his fiancée, Elana Kamen, were simply looking for a ketubah that reflected their personal aesthetic and vision. They couldn’t find it, so Master, an artist and sculptor, did what comes naturally for him—he created his own. At the couple’s wedding, the bonded-bronze sculpture—depicting an embracing couple emerging organically from the branches of an overshadowing tree—so wowed the guests that Master started thinking there might be a business in custom sculptural ketubahs.

In 2016, he founded Timeless Ketubah, offering both two- and three-dimensional ketubot (plural), with six text options—from the traditional text in Aramaic to modern versions for interfaith and same-sex unions—that can be further personalized if desired. If the bride and groom prefer to create their own text from scratch, that’s doable, too.

“A lot of people are going in that direction,” Master says, “and I think it’s something that’s happening in weddings in general—couples want their wedding to be meaningful and a lot less cookie-cutter.”

A Master ketubah is anything but cookie-cutter. His time at Rutgers’ Mason Gross School of the Arts taught him not to be afraid of artistic experimentation and afforded him lessons in project and time management that have proven invaluable. (His MBA hasn’t hurt, either.)

Last year, thanks to word of mouth, online advertising, and relationships with other wedding vendors, Master was able to quit his job helping people with criminal backgrounds get back into the workforce and devote himself full time to Timeless Ketubah, which is based in Brooklyn, New York. Its success has prompted him to branch out. Through his new company, Timeless Wedding Vows, he’s now offering sculptural keepsakes that commemorate wedding vows—“to take the essence of the ketubah,” he says, “and expand on it for any couple.”

Today, your gift will help unlock $100,000 for student aid. Make a gift. Share your voice. And Think Bigger for #RUGivingDay.