As founder of the nonprofit Dog Is My CoPilot, Peter Rork uses his Cessna Caravan turboprop plane to ferry dogs and cats from overcrowded shelters in which they face euthanasia to shelters that have pledged never to kill an animal in their care. Since its formation in 2012, Dog Is My CoPilot has saved the lives of more than 13,000 animals, with Rork RC’74 at the helm and in the cockpit. 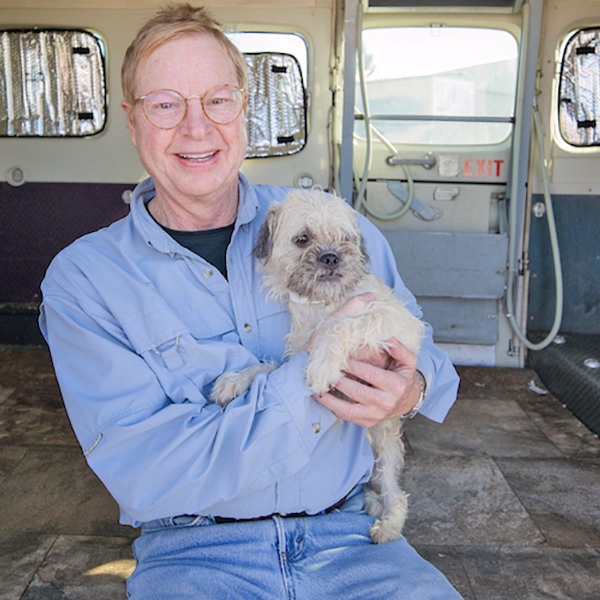 For 30 years, Rork practiced orthopedic surgery in Jackson Hole, Wyoming, a skier’s paradise, and loved it. “Being the knee guy in Jackson Hole was like dying and going to heaven for an orthopedic surgeon,” he says. But after three decades, he was tired of the grind and ready to retire. While others in his position might have opted for a life of golf (or trout fishing, for which Jackson Hole is also famous), Rork launched a second career in the air.

A decade ago, a friend had asked him to transport three golden retrievers from her home in Idaho to a no-kill shelter in Colorado. Rork—who grew up with dogs—happily agreed. He had been in love with flying since he was a boy growing up in Ridgewood, New Jersey, where he regularly checked out airplane books from the local library. On his 16th birthday, Rork applied for and received his student pilot’s license and on his 17th, he took the private pilot’s flight test, which enabled him to carry passengers.

Rork found the experience of transporting the retrievers tremendously moving. “That was when I was first introduced to the fact that perfectly healthy and adoptable animals were being killed at the rate of 5,000 a day,” he says. That brutal realization was the genesis of Dog Is My CoPilot. Shelters with an overflow of animals coordinate with the no-kill shelters to get the maximum number of dogs and cats transported, and Dog Is My CoPilot sets the flight schedule. The nonprofit organization is funded solely by donations, some from the Petco Foundation, some from the general public, and the rest, Rork says, “out of my own pocket.”

Today, it’s not unusual for Rork to transport 100 or more dogs and cats per flight, from overburdened shelters in Texas, New Mexico, Arizona, and California’s Central Valley to no-kill organizations in Colorado, Wyoming, Utah, Montana, Idaho, Oregon, and Washington. In the good-weather months from late March to early November, he’s on the road—or, more accurately, flying above it—four times a week. Rork’s dedication to saving the lives of cats and dogs has not gone unnoticed: Last November, the Petco Foundation presented Rork with its Love in Action Award.

Still, he faces some unique challenges in his new profession. While Rork has aced the task of flying 200 pets to four different locations without leaving a single dog or cat with the wrong group, he still finds the fragrance of so many animals in an enclosed space to be overwhelming. This is especially true on flights that cover 800 to 1,000 nautical miles and typically take up to six hours nonstop. Rork also finds it challenging to deal with the condensation so many panting dogs can generate, especially when taking off in humid conditions. “The entire instrument panel and all the windows get fogged up,” he says, adding, “Think prom night in the backseat of a Volkswagen.”

For Rork, knowing that he’s offered a better life to so many animals makes such minor discomforts easily tolerable. Last year, in fact, the number of dogs and cats he saved finally surpassed the number of knees he repaired over the course of his entire medical career, although he has found both endeavors equally rewarding. Still, he says, there are advantages to working with animals over humans: “I don’t worry about malpractice suits from the animal rescues,” he says, “and the dogs never blame me for a bad outcome.”