On February 27, Atnre Alleyne and Tatiana Poladko left their home outside Kyiv, heading west with their three young children and Poladko’s elderly father. Russian helicopters had flown low over their neighborhood the day before, and it was increasingly clear that the military siege of Ukraine was a threat not just to military targets but to civilians. It took about a week for the family to get a ride to Zhytomyr (100 miles west of their home), take a train to Kovel (185 miles to the northwest) and another train to Lviv (100 miles to the south), and finally to walk more than four miles into Poland.

In the middle of their flight to safety, Alleyne CCAS’06, GSC’07 paused to host a long-planned virtual workshop for more than 100 U.S. Black and Latino high school students who are part of TeenSHARP, the nonprofit group that he and Poladko GSC’07 founded in 2009 to improve college access to underrepresented students. The workshop’s theme was racial justice and how students can use their voices to create more equitable and inclusive institutions in the education system. Alleyne led the workshop while holed up with his laptop in a hotel bathroom in Zhytomyr.

“The [TeenSHARP] staff was like, ‘Are you going to do it, or do we have a Plan B?’” Alleyne says. “And I was like, ‘I’m going to do this,’ because I need [the students] to know that, even in the middle of this war, I need [them] to lead, whether [that means] fighting for humanity in Ukraine or making sure that you’re represented in your school buildings.”

Alleyne, Poladko, and their family are among more than 3.4 million people who have fled Ukraine since Russian forces began attacking targets there in February. The attacks have become increasingly fierce and, according to many reports, increasingly indiscriminate, with more than 900 civilians killed. Among them were a pregnant mother and her baby who both died shortly after being rescued from a bombed maternity hospital in Mariupol, according to reports.

Ukrainian forces have flooded the area to repel Russian advances even as Russian missiles have hit hospitals, schools, apartment buildings, and power plants. At times, evacuation routes have been all but closed to civilians. News reports call the exodus the most severe refugee crisis since World War II. Alleyne hopes his family’s story will help keep Americans focused on the crisis—and ready to sacrifice for refugees in need. 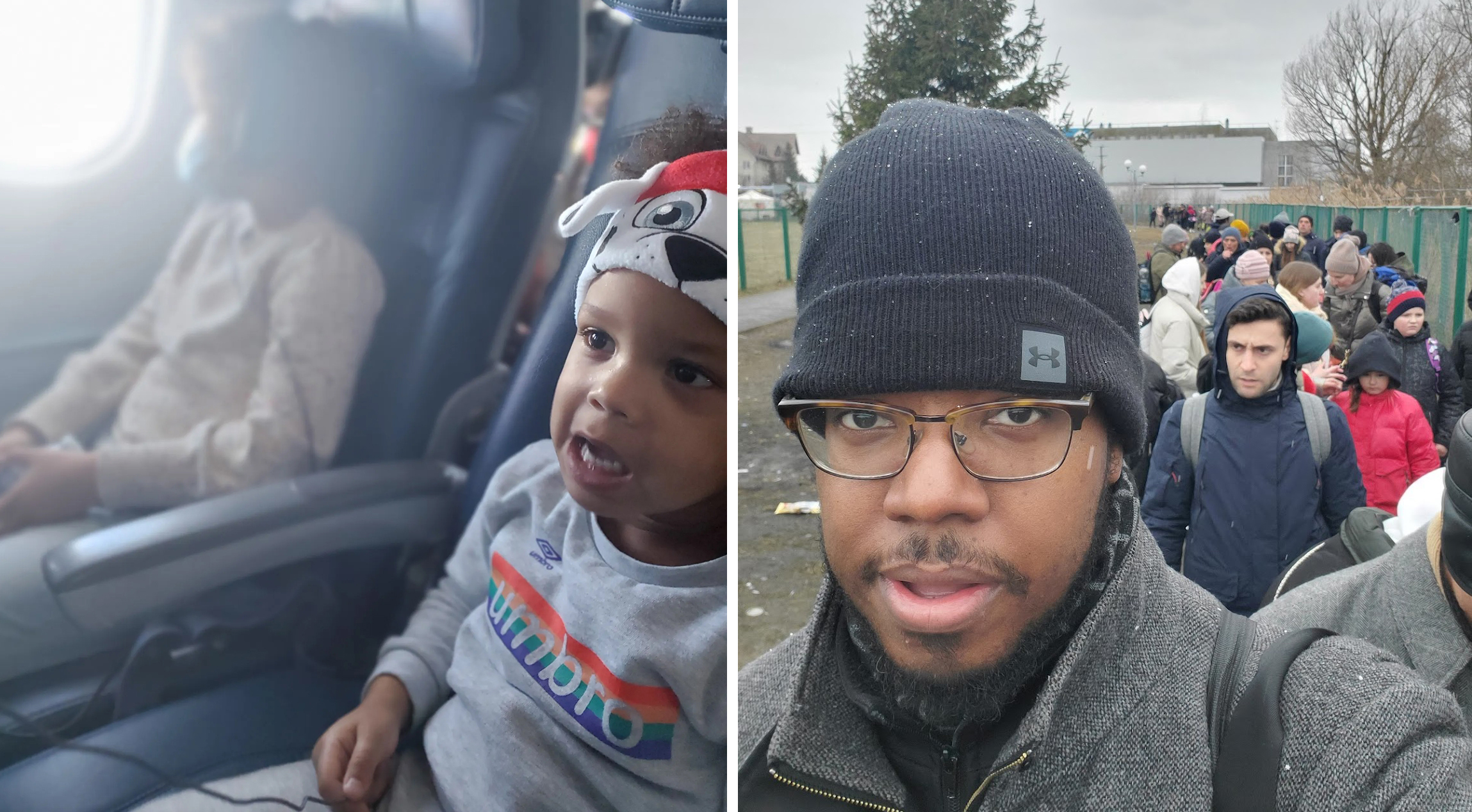 Atnre Alleyne (right) and his children, Zoryana and Nazariy (left), during their arduous trek from Ukraine to Poland.

Alleyne and Poladko met at Rutgers–Camden in 2005. Alleyne was finishing a five-year combined bachelor of arts in economics and master of public administration (MPA) degree program. Poladko, a native of Ukraine, was pursuing an MPA as part of the Edmund S. Muskie Graduate Fellowship Program, a U.S. Department of State-funded initiative for students from former Soviet Union countries, which has since been discontinued.

Poladko has always been “a rock-star leader,” Alleyne says. As a teenager, she was the Focal Point for Youth for the United Nations in Ukraine and was active in the Orange Revolution political protests of 2004 and 2005. (Two of her closest friends from her youth are Ukraine’s ambassador to Australia and the Ukrainian deputy minister of the economy.)

The two high-achieving students met while working at the Senator Walter Rand Institute for Public Affairs at Rutgers–Camden. They had classes together, and Poladko began visiting Alleyne’s church. Soon they were dating. They married at Rutgers Gardens in New Brunswick in 2007 and moved to Camden, and later to Wilmington, Delaware, when Alleyne got a fellowship with the Strategic Data Project at Harvard University. They both started graduate programs—Poladko pursuing a doctorate in sociology at Temple University and Alleyne a master’s degree in political science and international relations at the University of Delaware.

In 2009, the couple co-founded the TeenSHARP organization to help Black and brown youth from underserved communities in New Jersey and Delaware get accepted to and excel at elite universities. SHARP stands for “successful, high-achieving, and reaching potential,” and its mission is to make sure students “excel in high school, thrive in the most selective colleges, and [are] positioned to access competitive career opportunities.”

Poladko’s visa required that she return to Ukraine for at least two years before she could live permanently in the United States, but some foreseen and unforeseen circumstances delayed that journey. At first, she was busy launching TeenSHARP, finishing her doctorate, and raising her young children. The pandemic put things on hold as well. When Poladko’s mother died in 2020, COVID-19 travel restrictions kept her from going home to attend the funeral. It wasn’t until January of 2021 that the family moved back to Ukraine.

Alleyne, who grew up in New Jersey and went to high school in Ghana, says he romanticized what life in Ukraine would be like before he and Poladko moved. After settling in Novi Petrivtsi, 15 miles outside of Kyiv, he found “it was actually better than I was predicting.” Poladko, who hadn’t been home in 15 years, felt the same: during her absence, conditions had drastically improved in Ukraine, which became an independent nation in 1991. Their three children—Zoryana, 7, Nazariy, 3, and Taras, 2—started learning to speak Ukrainian. Poladko’s father, Eduard, moved in with the family last December so they could care for him.

Overall, life was good. The prospect of an invasion by Russia was an abstraction—until suddenly it wasn’t.

Alleyne and Poladko don’t own a car and after the Russian invasion began, they scrambled to find a way out of Kyiv. As the entire region was locking down and Russian troops seemed to be closing in, they found another parent from their son’s school who was also looking to flee the area with a young child of her own. They all packed into the woman’s small sedan: The driver and Eduard sat in front, and the six-foot-six Alleyne squeezed in with Poladko and the four children in the back. It was the first in a series of just-in-time acts of solidarity and cooperation that helped the family get to safety, Alleyne says, adding that his own family has been relatively privileged. 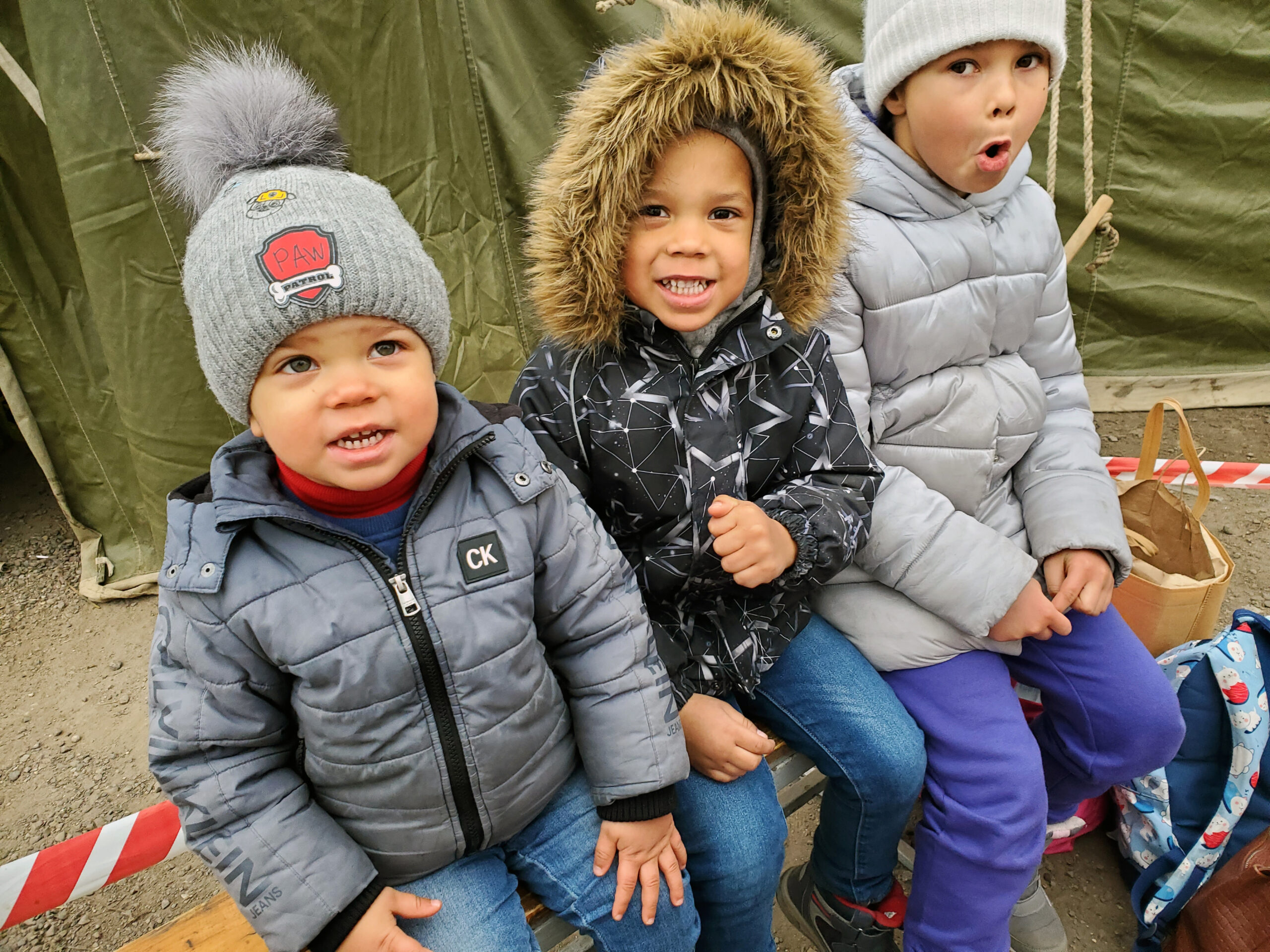 Alleyne and Poladko’s children, Taras, Nazariy, and Zoryana, take a break from their travels in Shehyni, 5 miles from the Polish border.

He hopes the rest of the world will stay focused on what’s happening in Ukraine despite reports of racial discrimination against Black refugees. Anti-Blackness is a real phenomenon within the United States and around the world, he says, but there’s been profound solidarity among people fleeing Ukraine. He adds that it will take a global effort, including support from people around the world, to meet the needs of the country’s refugees. “If the kind of support that’s coming in now [is short-lived], it’s going to set the country back decades and decades, when [it’s] only been independent for 30 years,” he says.

Today, Alleyne and Poladko and their family are living in a rental home in Warsaw and looking for permanent housing through June to give their children a measure of stability until the end of the school year. They have held virtual events with their church in Palmyra, New Jersey, to raise awareness about Ukraine, and they’ve shared the story of their journey from Kyiv with U.S. news outlets, including the Philadelphia Inquirer and WHYY.

The requirements of Poladko’s visa haven’t changed because of her marriage to a U.S. citizen, so technically she still needs to finish her two years in Ukraine before the family can relocate to the United States. Alleyne says the family is still hoping to move back to their home in Ukraine, but it remains to be seen how long the war grinds on and how much damage the ongoing shelling does to the country. Even as the fighting and destruction are intensifying, Alleyne says the seeds of a recovery have been planted: his daughter’s school in Ukraine recently restarted remote learning.

“[Ukranians are] fired up about their independence and their country. People are willing to sacrifice, some in terms of their whole life, and some in other ways that are meaningful as well,” he says. “The collective spirit really is powerful, and I want more people to know about how resilient Ukrainians are.”