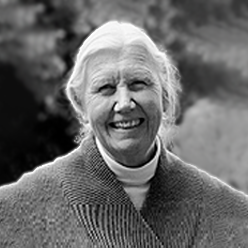 Elise Biorn-Hansen Boulding, professor emerita of sociology at Dartmouth College, was born in Oslo, Norway, in 1920. She served as a professor at the University of Colorado at Boulder from 1967–78 and at Dartmouth from 1978–85. She was on the governing boards of the United Nations University and the United Nations Educational, Scientific and Cultural Organization Prize for Peace Education. In 1984, she was active in the move to establish the U.S. Institute of Peace. She was also a founder of the International Peace Research Association and a distinguished member of the Religious Society of Friends (the Quakers). Boulding has received numerous honors for her achievements as a scholar and activist in the areas of peace and world order, democracy, and women in society. Douglass College honored Boulding with its Distinguished Achievement Award in 1973, and in 1990 she was nominated for a Nobel Peace Prize by the American Friends Service Committee. She wrote many books, including Building a Global Civic Culture: Education for an Interdependent World and Cultures of Peace: The Hidden Side of History.