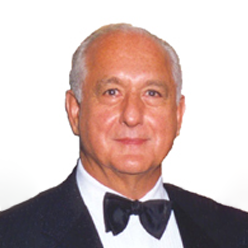 Jerome Aresty joined his brother in 1964 to develop what was then a small ladies’ clothing manufacturer into a major sportswear firm: Alfred Dunner Inc. The family-owned company quickly rose to the top of the fashion industry, bringing affordable women’s sportswear to the masses in retail outlets such as Macy’s and JCPenney. Today, the New York City-based company takes great pride in its tradition of providing stylish, quality apparel for the sophisticated woman. After Aresty retired from the business world, he concentrated his efforts on supporting a variety of philanthropic organizations; chief among them was Rutgers. The state-of-the-art Aresty Amphitheater at Rutgers Stadium and a visiting scholars program at The Allen and Joan Bildner Center for the Study of Jewish Life are two prime examples of the Arestys’ generosity, and in 2004, the Aresty Research Center was established on the New Brunswick Campus to support and mentor students. Aresty and his wife, Lorraine, also founded several merit-based scholarship programs at Rutgers. They also supported numerous local charities, among them the Morristown Memorial Hospital, where Jerome was an honorary board member. He was also an emeritus member of the Rutgers University Foundation Board of Overseers.