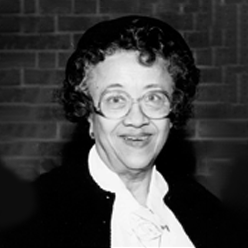 The first African-American student admitted to Douglass College, Julia Baxter Bates graduated magna cum laude in English with hopes of becoming a high school instructor. After earning a master’s degree from Columbia University and then being denied the right to teach in New Jersey’s high schools because of her skin color, she became an instructor at Dillard University in New Orleans. She then headed the research component at NAACP headquarters for two decades in New York, where she worked with powerful civil rights leaders Thurgood Marshall, W.E.B. DuBois, and Walter White. Her research influenced Supreme Court decisions that outlawed discrimination in housing and education. In 1954, the most prominent of these, Brown v. the Board of Education, declared school segregation unconstitutional. In the 1970s, she directed adult and special education in a Newark alternative school. In 1984, she joined Essex County College and worked to secure millions of federal dollars for underprivileged, first-generation college students. She was honored in 1992 when the Associate Alumnae of Douglass College established the Julia Baxter Bates Fellowship. Bates died in 2003.