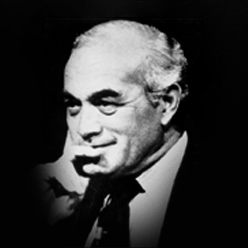 Best known as the host of PBS television’s Washington-based political talk show Agronsky & Company, Martin Agronsky pioneered the “talking heads” news format. When he retired in 1998, his show, which ran for 18 years, was the nation’s top-ranked public affairs program. Agronsky started his career as a newspaper reporter, then, in 1940, became the Balkan correspondent for NBC Radio. He accompanied the British Army in Turkey and the Royal Air Force in the Middle East and Greece. After the Pearl Harbor attack in 1941, he covered General Douglas MacArthur’s Pacific campaign and became well known for his fearless reporting. He was a news commentator for both ABC and CBS in Washington, D.C., and received many prestigious awards in broadcasting, including the Peabody Award in 1952 for “his penetrating coverage of the activities of Senator Joseph McCarthy,” and the Alfred I. DuPont-Columbia University Award in 1962 for his coverage of the Adolph Eichmann trial. Agronsky was also the first TV reporter to interview a sitting Supreme Court justice; his second such interview, with Hugo Black in 1968, won him an Emmy. No other broadcaster had ever worked for all three major networks and PBS. He died in 1999 at age 84.