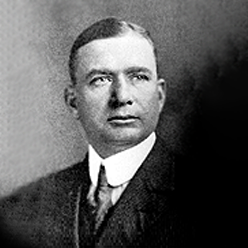 Philip Milledoler Brett led Rutgers as its acting president from 1930–32, about 100 years after his great-grandfather, whose name he bore, occupied the same place of honor. “Brett possessed not only high ability and deep devotion to Rutgers but also a rare personality of such warmth, generosity, and charm as to win the affection of all who knew him,” writes the late Rutgers historian Richard P. McCormick RC’38, GSNB’40. Rutgers faculty implored Brett to accept appointment as president, but he declined, referring to the offer as “the greatest honor which has come to me during my life.” Born in Newark in 1871, he was a direct descendent of Philip Milledoler, president of Rutgers College from 1825–40. Brett was a member of the Rutgers Board of Trustees from 1906–56, and was one of New York City’s most successful corporate lawyers as a partner with the law firm of Nevius, Brett, and Kellogg. The firm was heavily engaged in legal work connected with the subway system and the construction of the Lincoln and Queens Midtown tunnels, as well as various defense contracts in the United States, the Caribbean, and Canada. Brett served as the firm’s counsel until his death in 1960 at age 89.