The Richest Man in Town

Rutgers alumnus Philip Van Doren Stern who penned a short story that became a holiday classic had an accomplished career as a writer and editor. He’s pictured above right in 1942. 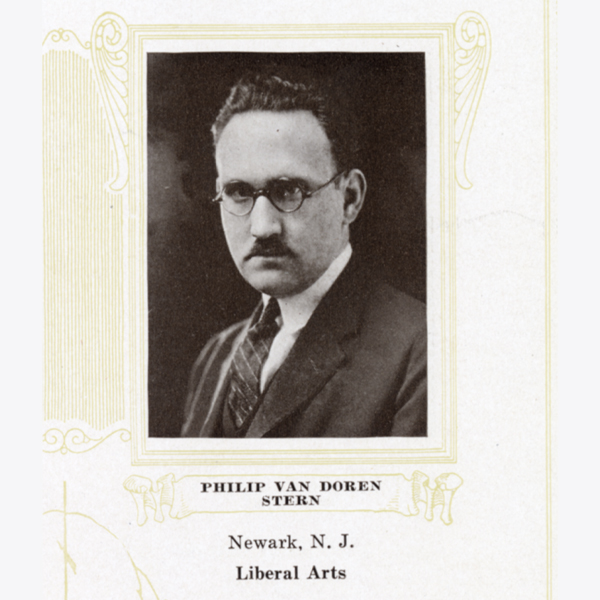 Pratt was the creation of Philip Van Doren Stern, a 1924 Rutgers alumnus who wrote a short story in 1938 entitled “The Greatest Gift” that featured Pratt contemplating suicide on Christmas Eve until a peculiar stranger intervenes and gives him a chance to see the world as if he’d never been born. Despite the efforts of Stern’s literary agent, the story remained unpublished until 1943 when Stern self-published 200 copies and sent it out as a Christmas card. The story made its way to director Frank Capra, who expanded the story and turned it into the 1946 film that ultimately ranked 20th on the list of the greatest American films of all time as chosen by the American Film Institute.

It’s a Wonderful Life remains immensely popular, annually airing Christmas Eve on NBC and in cinemas across America, as CNN noted recently. “The Greatest Gift,” featured this month in the Library of Congress Magazine, continues to attract attention.

Although Stern is most remembered today for inspiring the film, it was just one short piece in his storied career of publications. He was a prolific writer and editor of more than 60 fiction and nonfiction books, including The Life and Writings of Abraham Lincoln, published in 1939. His 1942 novel, Drums of Morning, was, as the New York Times described, ”the long overdue fictional answer to Gone with the Wind.”

Rutgers honored Stern with an honorary doctorate in 1940. In 1941 he authored “Rutgers University and the American Way of Life,” a pamphlet celebrating Rutgers’ 175th anniversary published by Rutgers University Press, which he had been instrumental in helping establish in 1936. Stern was also a prominent typographer who, at one time, was head of the manufacturing department of Simon and Schuster.

Stern was born in Wyalusing, Pennsylvania, but grew up in New Jersey and lived in Newark while studying at Rutgers. After living most of his adult life in New York, he retired to Florida in the 1970s. He died in 1984 in Sarasota, Florida, less than two months before his 84th birthday.

His daughter and only child, Marguerite Stern Robinson, earned a doctorate from Harvard University, worked globally in microfinance, and wrote a book entitled The Microfinance Revolution: Sustainable Finance for the Poor. She wrote in the afterword to “The Greatest Gift,” which was most recently republished in 2014, that the story and subsequent film were a major influence on her. She says that her father’s story “is as compelling today as it was nearly seventy years ago because, in this story, lies a powerful message about the significance of the lives of all of us.” She concludes, “As for its author, Philip Van Doren Stern, I borrow a line from George Bailey’s brother, Harry: ‘He was the richest man in town.’”

For more about Stern and Rutgers, read “Inspiring a Holiday Classic” by Cindy Paul RC’81.